The Ekalesia Kerisiano church at Liku ws packed to overflowing at the funeral service for the late Lafetu Sipeli. He died at Niue Foou Hospital on Tuesday 18 April after a short illness.

Lafe’s daughter Ane Sipeli Holamotu gave a detailed summary of his life from when he was young to his final days on this earth. The fact that Ane, who was born and bred in New Zealand, spoke completely in Niuean is testament to Lafe’s insistence that his children must learn to speak the language

The church that Lafe helped to build was packed to overflowing, tribute to a layman who gave much for his church

Ane painted a picture of a caring father who provided for his children and gave valuable insight into the ways of Niue. He was also very much a man of the island even though he made his home in New Zealand. Ane also acknowledged the role that their mother Anesita played in supporting Lafe in his quest to return something to his island. When Anesita passed away in Auckland, Lafe was still on the island working on the church.

Young Vivian spoke of Lafe’s connections to the village of Hakupu from the days when he attended school at Tuatea boarding with his grandparents Galiki and Veia. It was that connection that brought him back to the Hakupu to help built the Ekalesia church.

Dr Matagi Vilitama, currently based in Sydney, returned especially to farewell Lafe. He delivered a moving tribute to a much respected older friend and mentor. Matagi was able to give a glimpse of the life of this layman who devoted an extraordinary amount of time in the service of the church. Even when he knew he had not long to live, he gave his last ounce of strength to complete a permanent mounting for a commemorative plaque for the Ekalesia Kerisiano church at Namukulu.

Village elder Sionetasi Pulehetoa paid tribute to the man largely responsible for building the Ekalesia church in the village.

Younger brother Pokotoa Sipeli brought a few smiles when he told the congregation of a unique method of communications between the brothers, particularly when they’ve agreed to disagree. Poko will tell his wife Pati, who will then relay it to Lafe, who will then respond with a reply to Pati, who then reports back to Poko.

When the service was over and as the children of the family carried Lafe’s coffin to the waiting vehicle, the heavens opened up. It could well be just an ordinary heavy tropical rain, but old people might see it differently. They will say that rain is always a good omen but a heavy tropical downpour can only mean one thing… Niue’s gods of old are indeed pleased with their son Lafetu Sipeli. 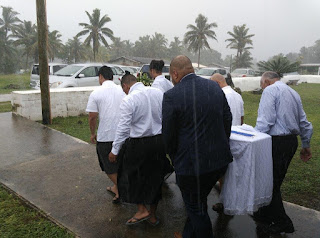 Hafe Vilitama – A Life Of Gratitude