Home Letters & Notices Finally, the Fix We have All Been Waiting For!

After months of deliberation and often heated discussion in the out-going Assembly, it seems the government has finally got around to fixing the myriad of potholes on the road.

It is not just one section that requires patching, it appears all the road need some attention – some more so than others. The section that runs past the island’s flag-ship tourist accommodation Scenic Matavai is particularly bad. A bumpy ride on arrival and on departure would not be the kind of memory that we want out visitors to remember.

The main coastal road north from Alofi has been the subject of debate since the beginning of last year. The local solution was to fill the potholes with makatea – decomposed coral – but that temporary solution lasts only until the next heavy shower. A higher than normal rainfall has exacerbated the problem, adding more potholes, as if there weren’t enough already.

Faced with worsening road potholes, with more appearing after a heavy down-pour and mounting criticism, the government finally took action in January and engaged road-sealing contractors Fulton Hogan to come up with a fix.

Three months later, Fulton Hogan has come up with a Band-Aid solution reputed to be costing something in the vicinity of $90,000.

Tala Niue caught up with the roading-gang today at Makefu.

Here are the steps to fix the potholes, the Niuean way…. 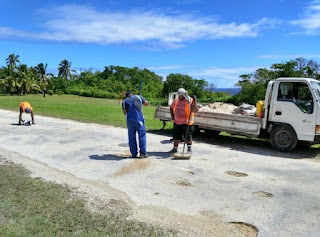 Identify the appropriate orifice and then give it a quick clean. 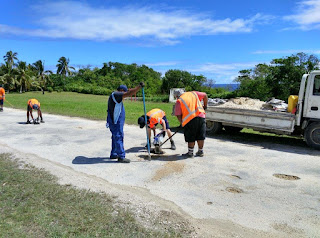 Open the bag with ready-made mix of tar and aggregate – and may be a secret F&H ingredient.  Pour it into the said orifice.
The final step is to run a compactor over the fix.
Can it really be that simple?