Election 17 may well turn out to be the mother of all elections – no less than 24 candidates, which must be a record for the island, are vying for just 6 Common Roll seats. The unprecedented number of candidates could be a reflection of the dissatisfaction over the performance of sitting members. A more likely explanation could simply be the realisation that you cannot hope to influence, from the side-line, the direction in which the country is heading.

Here they are, in alphabetical order:


The only palagi ever to be elected to the Niue Assembly, Coe has served continuously for 23 years. His longevity in the House is cause for celebrations for Coe’s friends and a pain in the proverbial for his detractors. Coe is one parliamentarian who is not afraid to ask the hard questions and at times he has been accused of being insensitive. The changing demographics of electors could mean an erosion of Coe’s support base; younger electors are not so well conversant with Coe’s history.

Ida Hekesi
A former director of tourism Ida Hekesi appears to enjoy the confidence of her cousin the Premier judging by her appointment to statutory boards.

Rozlyn Hipa
Rozlyn Hipa – better known locally as Pinky – is a newcomer to the Common Roll and is one of ten women on the list.

Merry Anno Lui  Iakopo
Another new name in politics. She returned to the island a little while back after spending time in New Zealand.

O’love Jacobsen
Having served as the island’s High Commissioner in Wellington for a couple of terms, O’love Jacobsen has not only thrown her hat into the ring she has also indicated that she will not be happy to be just another member on the backbenches. She is gunning for the top job. A seasoned campaigner Jacobsen has the ability to un-seat one of the incumbents provided she can mobilise her old supporters. Her absence in New Zealand as the island’s only diplomat may work against her but she is held in high regard by some in the Niue community there.  This could well translate into more support here.

Stan Kalauni – sitting member
Having polled the highest number of votes for all Common Roll candidates, Stan Kalauni was the choice of the unofficial opposition to challenge Toke Talagi for the Premiership.  He was not expected to win but with his nomination came the expectation that he will lead the opposition. It was a good plan that did not quite follow the script.
Kalauni is not the best orator in the House but he has gained the reputation of being a thoughtful speaker, a calming influence in the debating chambers. Whether this is sufficient to ensure that he maintains his high standing in the polls or that he retains the leadership of the unofficial opposition remains to be seen. 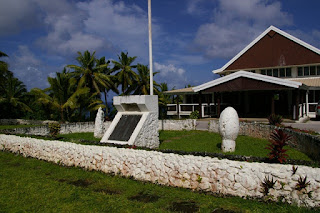 Charles Magatogia
Great to see a young person taking an interest in shaping the future of our country.  Charlie Magatogia is probably the youngest male candidate in this Election but not the youngest ever.

Lagisia Manttan
Lagisia Manttan is another new face on the roll. Most people know him as Jimmy the painter. He is likely to pick up a few votes from satisfied customers.

Igasiatama Mokole
A man of the cloth Igatiatama Mokole has set aside his religious ministerial responsibilities
for the secular world.

Catherine Papani
Catherine Papani is among the 10 women on the list. Quietly spoken but is known to have strong views on where the island should be heading.

Tama Posimani
Another old hand at the game of politics, Tama Posimani has served in cabinet and as the Speaker.

Moka Tano Puleosi
She should know the workings of the Assembly inside-out. Moka Tano is looking for a different type of seat in the House from what she is normally used to as the Clerk of the Assembly.

Togia Sioneholo – sitting member
This will be Togia Sioneholo’s fourth term in the Assembly if he is returned. Sioneholo has proven himself to be a force to be reckoned with in the House – often clashing with the Premier – who just happens to be his brother-in-law.  When he first entered politics in 2008 he held a cabinet post in the very first Talagi Administration. Differing views and possibly different political philosophies saw him sidelined for the second Talagi Administration. Sioneholo has performed well on the opposition benches which is why he is likely to retain his seat. He also happens to be the only lawyer in the House.

Cherie Tafatu
Another new candidate and one of 10 women on the list. Cherie Tafatu should appeal to the younger voters.

Grace Sisilia Talagi
In golfing terminology, Sisilia Talagi was two shots off the pace in the last election. She was 8th, just behind Asu Pulu in 7thplace. That kind of arithmetic looks very promising. Her background as a senior public servant and a diplomat are qualifications that would almost guarantee a seat in the House anywhere, except on this little island.

Sir Toke Talagi – sitting member
If Sir Toke Talagi is successful in his current bid to return to the Assembly and to lead the country, he will become the second longest serving Premier since Sir Robert Rex. He has already served 9 years as leader. Ill health has plagued Sir Toke in the last two years resulting in two medical evacuations. He has now declared that he is fully fit for another term – a declaration which some in the electorate are not accepting.

There is no shortage of critics when it comes to the Talagi Administration – most is aimed at the Premier himself. Topping the list of complaints is that Sir Toke is running the country like Toke’s Enterprises. He is also being accused of being too dictatorial, giving little room for his ministers to move or to even make public statements.  Opposition politicians are loud in their protest that Premier is winding back the clock to colonial times. The engagement of a former executive in the now defunct Reef Shipping Company to be the CEO of all State Owned Businesses has attracted a fair share of criticism. Sir Toke’s village of Alofi Toga has openly questioned his government’s decision to lease crown land – once customarily owned by Alofi Toga – to an Auckland based company for a shopping complex.

All these and other complaints however have come to naught; this is symptomatic of Sir Toke’s modus operandi – he is totally committed to doing what he thinks is right and in doing whatever it takes to achieve his goals for this island. Make the tough calls and stick to it.

If Sir Toke wins the leadership challenge it will be because the opposition has failed to offer an alternative government.

Maru Talagi
Maru Talagi is retired academic and a former senior public servant who is well versed with the politics of the island. This is not his first time on the list. He was placed 14th in the last elections.  A seat in the House would assist in addressing the woeful lack of university graduates in the Assembly.

Crossley Tatui – sitting member
He is likely to retain his seat. As a former Secretary to the Government he has a good understanding of the procedures of government which can at times, be used against him.

Sauni Tongatule
It is good to see another senior public servant who is prepared to leave the relative security of a government job for the relatively unsecure political arena. This is an opportunity for Sauni Tongatule’s colleagues in the public service to give him the support if they want to see a new face in the Assembly.

Joan Viliamu – sitting member
Against all predictions, Joan Viliamu survived the last polling to serve yet another term in the Assembly but not as a cabinet minister but an assistant minister. Whatever her secret is for getting the votes, she is not saying but she will probably need to rub the lamp a lot harder this time.

* * * * * * * *
Here is an open invitation for all candidates in the election – but perhaps more so for those who are contesting the six Common Roll seats – to let the people know your platform and what you stand for – what are your policies; what do you hope to achieve in the Assembly; where do you want to see the island heading in the next three years. This is your opportunity to tell the electorate why they should vote for you. If you have a flyer or a pamphlet, drop it off to me at Halagogo or stop me when you see me.
FB Comments

New Premier could be Dalton Tagelagi

Ben Siaki – A Man On A Mission